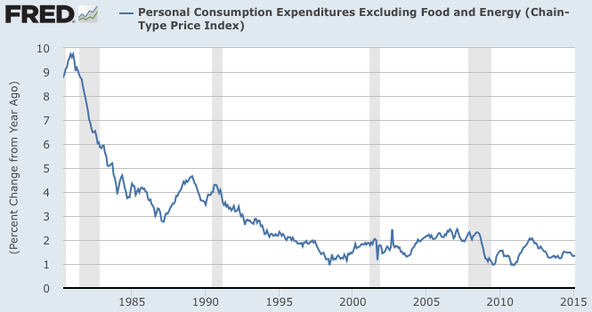 Any inflation above 3 percent, which has not been the case since 1993, would be deleterious to economic functioning.

A time of very low inflation, such as now, would be a good time to prime the pump; that is, spend money by the central government, expecting recirculation to promote economic growth.

You realize, from the graph, that inflation of one per cent, which is now, is really really low. A really, really good opportunity for a Green New Deal.

As the Shadow Government likes to call it.

Worked as translator, museum technician, truck lumper, lecture demonstrator, teacher (of English as a Second Language, science, math). Married for 25 years, 2 boys aged 18 & 16 (both on the Grant cross-country team). A couple of scholarly publications in the history of science. Two years in federal penitentiary, 1970/71, for refusing the draft.
View all posts by M. Meo →
This entry was posted in Uncategorized. Bookmark the permalink.